In light of the prevalent anxiety and curiosity about both human relationship and reading practices online, I have two simple claims, that meaningful human encounter is possible online and that bible offers an interface for this encounter.

See this dropmark collection, Relating and Reading Online for a collection of links to current examples of the anxiety and curiosity regarding human relationship and reading online (e.g. Nicholas Carr, Sherry Turkle, and the Future of the Academic Book). This dropmark collection is an experiment in a media translation of footnote. I can continue to collect related items from the web and have them aggregate here. I can even invite collaborators and add discussions to the collection. I initially tried to embed this collection in the page, but the size of the embed was out of proportion to the role of the collection in the post.

It may seem like these two claims have little to do with one another, other than the role of the internet in online human encounter and in reading practices these days. Yet, building on a Levinasian articulation of bible as the book of books, I will argue that reading practices produced by bible signal the very possibility of meaningful human encounter and provide a framework for imagining interpretive reading communities performed in emerging media spaces. Let us begin with the Book of books.

Later in his career, Emmanuel Levinas sat for some interviews with Philippe Nemo and the transcripts of these interviews were transcribed and translated by Richard A. Cohen into a marvelous little volume titled Ethics and Infinity.

It is no surprise to me that the compelling nature of Ethics and Infinity takes the form of a series of conversations rather than a written philosophical treatise. These conversations are not theses argued carefully and comprehensively, but points of encounter with the ideas of a man that beg us to explore more. Though the irony of my secondary reflections on these now written transcripts is not lost on me, this conversational model does speak to the intimate role of speech in the relation with the other for Levinas. In the introduction to ‘Is Ontology Fundamental?’ in Emmanuel Levinas: Basic Philosophical Writings, Simon Critchley nicely highlights the possibilities human speech offers for an encounter with the other that is not governed by comprehension:

The transcripts of these interviews were my introduction to the ideas, thought, and methodology of Levinas and as I continue to encounter more of his work, I come back to these interviews and hear them with deeper resonance and richness each time. If anyone were to question why a bible project like a proximate bible would be so interested in a continental philosopher such as Levinas, even a cursory glance at these interviews would clarify. In the first question of the first interview transcribed in Ethics and Infinity, which is titled ‘Bible and Philosophy,’ Levinas connects thinking to reading books as a ‘modality’ of humanness and suggests that for him, the Bible is ‘the book par excellence’ (Cohen translating Levinas, Ethics and Infinity, 22). The conversation continues toward questions about the relationship between bible, philosophical writings and the Russian literary classics. At one point, Nemo asks Levinas about the ways he has ‘harmonized’ biblical and philosophical thinking, to which Levinas responds: 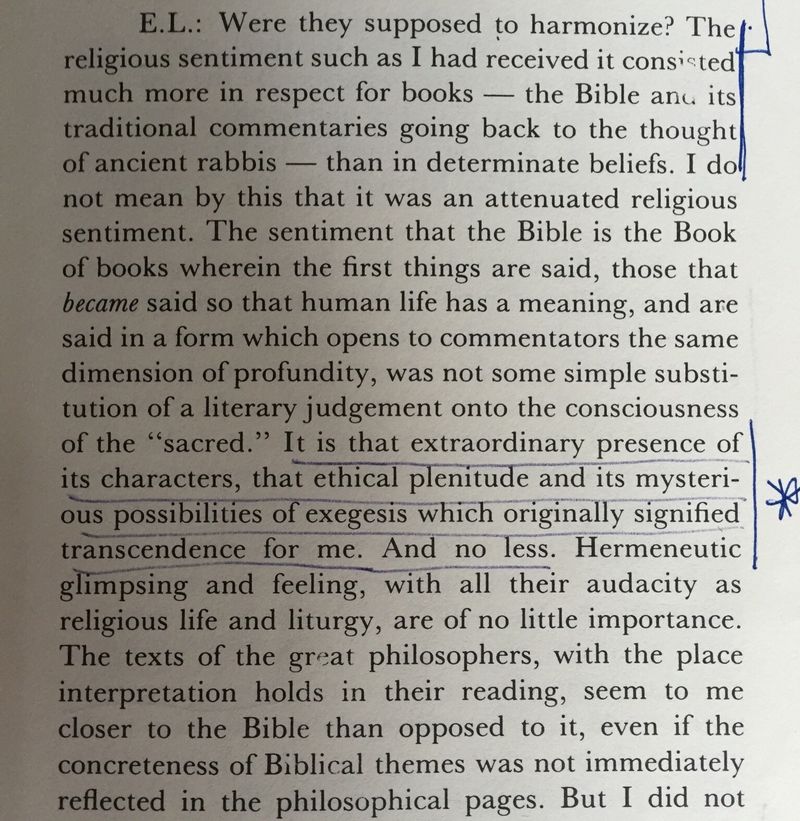 A close read of this response could take us on a journey through much of Levinas’s philosophical ideas, but we will focus on just a few echoes. What we will find is that bible and the process of reading it encourages, provides an interface with religion, thus with the face of the other. The bookishness he mentions in his initial response to Nemo about where thinking begins now gets wrapped into what Levinas calls ‘the religious sentiment.’ We have to remember here that Levinas often uses words in ways that are unfamiliar. Curiously, I have been working with this passage for several years and it wasn’t until just recently that the role of religion gained amplitude. My contentious background as an evangelically trained biblical exegete always drew me toward his correlation of mystery, possibility, exegesis, and transcendence in the underlined section above. I hadn’t even taken the time to consider this response as an articulation of Levinas’s theory of religion, or at least a statement about the practices that stimulated his religious imagination.

For a fuller exploration of the operations of religion in Levinas’s thought, see Emmanuel Levinas: Levinas and the Question of Religion. Here is a quote from p. 3 of the Introduction.

Levinas is careful to offer several clarifications about what he means by religious sentiment and its relationship to books. He is particularly keen to emphasize that this is not some literary minimization of the religious, but a recognition of the ‘sacredness’ of the process of reading. A relationship with books, and particularly bible, not a set of determinate beliefs, constitutes this religious sentiment for Levinas. As I have noted elsewhere, I often use anarthrous lower case bible instead of ‘the Bible’ to signal the vast cultural phenomena of bible beyond a single book. Perhaps Torah, written and oral, is a more familiar identifier for the interpretive phenomenon Levinas describes here. See note 8 on page 70 of Levinas and the Question of Religion for a list of resources on Levinas’s reflections on Torah.

Spending so much of my time thinking about the role of book technologies in religious identity, I have often missed the importance of the ’relationship with books’ in this discussion of bible. If we follow this passage further, we find this relationship with books restated in the commentators, the hermeneutic glimpsing, and the place of interpretation. It is not bible as a recipe book for determinate beliefs that signaled transcendence, rather the possibilities found in its infinite process of reading as meaning making. This process of reading as meaning, interpretation, Levinas suggests bible and philosophy may have in common.

This connection of religion to a relationship with books, most particularly with bible, provides the backdrop for the role of bible in facilitating meaningful human encounter. A look at a few other places where religion shows up in the writings and thought of Levinas will help illustrate this connection. In an essay from 1951 titled ‘Is Ontology Fundamental?,’ we find Levinas suggesting that metaphysics (or thinking in general) may not have the first word on human meaning, or relation with the other, which we also hear in Ethics and Infinity, 24-25. In ‘Is Ontology Fundamental?,’ Levinas applies this questioning of metaphysics to Heidegger’s ontology and the necessary comprehension at its core (BPW, 1-2). As the question mark in the title suggests, this essay asks if there is something more fundamental than or anterior to ontology, which, in the end, collapses back into comprehension (BPW, 5). Levinas offers a response to this question in a move from knowledge (horizon of being) to speech (language) as fundamental in the relation with the other. This relation with the other that exceeds comprehension, and thus is not founded on ontology, Levinas calls religion (BPW, 7-8).

Levinas goes on to write, ‘Religion is the relation with a being as a being,’ thus not governed by knowledge of being (BPW, 8-9). Does this relation, this encounter, with the other, that exceeds and precedes knowledge, have some connection to the ‘relationship with books’ we heard in the passage above from Ethics and Infinity, since both are spoken of in religious language? We will return to this question in a moment. Levinas moves from religion to a discussion of face in ‘Is Ontology Fundamental?,’ using similar language for both. We hear an echo of ’Religion is the relation with a being as a being’ in his suggestion that ’The relation with the face, speech, as event of collectivity, is a relation with beings as such, as pure beings’ (BPW, 10, emphasis my own). If we follow this overlap in language, the relation with the face is religion. We hear this connection of religion and face even more poignantly in his later work, Totality and Infinity, where Levinas continues his questioning of ontology and calls religion an ultimate structure and the face to face an ultimate situation

Religion and the face are undoubtedly connected for Levinas and this encounter with the face of the other, which is religion (that which is irreducible to comprehension), is somehow signaled by the mysterious possibilities of exegesis of the Bible. Yet, Levinas is clear that the face is that which makes a being human, not a thing (BPW, 8-9), so in this sense, bible is not a face. He speaks of reading as a ‘modality of being,’ not being itself (EI, 22). So, the interpretive practices of bible, the mysterious possibilities of exegesis in each character encountered (both alphabetic and narrative) offer not a face but an interface with religion.

Interface is this space of ‘relationship with.’ It is the relationship with books, the discourse of reading, that constitutes the religious sentiment for Levinas, not only the books themselves. In her essay, ‘Humanities Approaches to Interface Theory,’ Johanna Drucker helpfully intertwines digital media studies explorations of interface design with humanities questions of subjectivity. She gives us a view of interface as more of a theatre than a window (Drucker, ’Interface Theory’, 9). 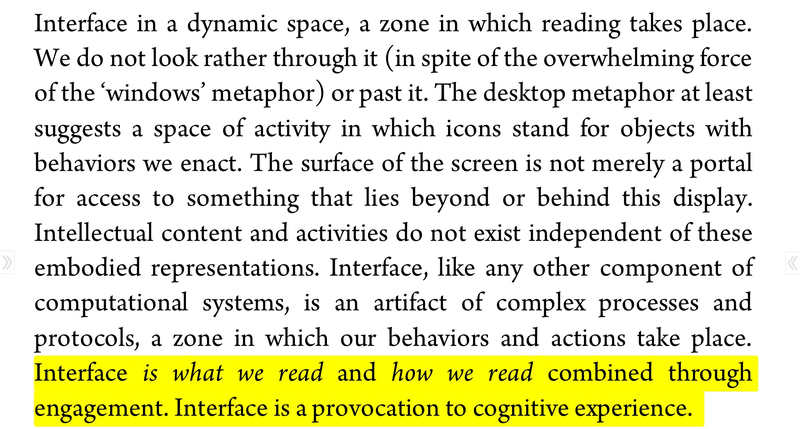 ’Interface is what we read and how we read combined through engagement.’ Before I had encountered Drucker’s work, this question of the relationship between how we read and what we read drove my desire to explore bible as media (see what’s in a title? for more). In this performative notion of interface, I hear many resonances with the religious sentiment as a relationship with books in Levinas. Much like relation with the face–religion–grounds the possibility for knowledge, here, Drucker suggests that ‘Interface is a provocation to cognitive experience,’ not its consequence (Drucker, ‘Interface Theory,’ 9).

Thus, bible is a religious mode insofar as it provides an interface for encounter (engagement) that opens to human meaning which is not at first governed by comprehension, but provides the conditions of possibility for knowledge itself. Now that we have seen how bible as book, an interface, can shape the possibilities for human meaning and meaningful humanness, I will turn to a closer look at Drucker’s interface theory and its relationship to subjectivity and the face in Levinas. This relationship between face and interface will lead us to explore two important ideas in Levinas, proximity and infinity, while providing some guidelines for interface design that could translate this religious sentiment of bible as book into our emerging media ecosystems.