Book is undergoing a major media transition as print wanes in its dominance and the internet and mobile devices transform our reading habits. With the ever entangled histories of bible and book, this emerging media age and its transformation of reading practices begs us to imagine bible as an anarchic interface, a space of contact where meaning is produced without the reign of an original.

Thinking of bible as an interface rather than simply as a container for content will allow us to explore the possibilities of emerging technologies to translate and transform enduring traditions of bible reading into the coming media age without succumbing to the temptations of typical media binaries of new and old, good and bad. As we consider the design of book interfaces that provoke probabilistic production in the practice of reading, I will advocate for attention to an affordance of anarchy that dethrones the governing role of a singular original without eradicating useful historical relations. Bible reading communities throughout history have provided some models for this anarchic interface and can provide important guidance and wisdom as we explore emerging media capacities for our relationship with books.

Building on Johanna Drucker’s work with interface theory and the Humanities, I will begin with a look at interface as a way of interrupting the container notion of book and suggesting a greater focus on relationality and reading practices in our discussion of media transitions and reading interface design. Then, based on the philosophy of Emmanuel Levinas, I will argue for an anarchic relationality that ought to shape our interface design toward creative encounter that resists emerging media dispositions toward consumption. With the possibility and value of anarchic interface established, I will then suggest ways to pursue bible as anarchic interface in our emerging media age. A look back at the performance of anarchic interface on the Talmudic page and in illuminated medieval manuscripts will inform our both the theory and design of our interfaces. Finally, I will beckon us forward by offering two experiments that highlight the challenges and possibilities of anarchic interface design and will offer some possibilities in light of the pervasive anxiety about human relationship and reading practices in today’s media environment.

Before we get started into our exploration of interface, why even bother with these questions of bible, book, and technology?

emergence of a medium

From the birth of the codex to the fall of the bible, medium has mattered in the life of bible both in its necessary entanglement with content and in its significant social effects. In The Birth of the Codex, Roberts and Skeat give us a careful look at the storied material history of the technology that has come to dominate our cultural idea of book, the codex. Nearly half of the pages of their own codex are devoted to the role of early Christian practices of scripture in the rise of the codex to prominence as a book technology, with this bold claim emerging from their analysis of the manuscript data (p. 42):

Acknowledging the difficulty of firmly establishing the ‘biblical’ category and signaling their sensitivity to the narrow provenance of manuscript evidence, all in Egypt, Roberts and Skeat still resoundingly suggest that bible as book begins exclusively as a papyrus codex. Newer manuscript evidence and different approaches to categories have challenged the ‘always’ of this conclusion. Yet, the strangeness of this early Christian preference for codex has been reinforced by many more recent explorations of this evidence.

In a book that deeply shaped my own ideas about the adoption of codex technology by Christians, Books and Readers, Harry Gamble focuses more on the readerly use of early Christian texts than on their literary production. Though he may differ in his conclusions from Roberts and Skeat, there is little doubt that bible played a part in the emergence of a new interface. Gamble suggests, “SOMETHING HERE ABOUT XIAN use and emergence of codex.”

add a note about other perspectives on role of bible in codex development - Gamble, Hurtado, etc. Offer p.oxy 1075 and nongbri article as an example.

In my own work on the book as a technology for scripture in antiquity, I found a combination of Gamble, Epp, and O’Donnell provided a compelling picture of

twilight of an icon

The first chapter of Timothy Beal’s book The Rise and Fall of the Bible is titled ‘The End of the Word as we Know It,’ and he feels fine (kindle location 371).

The cultural iconicity of ‘the Bible’ as ‘the Book of books’ that is undergoing deconstruction is the bible as authoritative, univocal, practical, accessible, comprehensive, and exclusive (Beal, Rise and Fall, kindle location 121-122). As Beal also notes, it is not a coincidence that this transformation of the bible as cultural icon coincides with a major cultural translation of the book as a medium (Rise and Fall, kindle location 1161).

Just as in antiquity, bible played a role in the emergence of a new book technology, so today, bible as book is entangled in a media transition from the reign of print to a proliferation of interfaces in our emerging media age.

In Understanding Media: The Extensions of Man, Marshall McLuhan points us toward the cracks in the reign of print, that illustrious descendent of the codex, in the face of an emerging electronic age. McLuhan reminds us that technologies (media) are extensions of ourselves and that the message of every medium is its effect on our social relations (McLuhan, Understanding Media, 7-8).

Beyond the obvious and important entanglement of form and content, McLuhan emphasizes the impact of technologies on human relationship with the world and one another through a ‘change of scale’ not simply a newness of kind (McLuhan, Understanding Media, 8).

Here, McLuhan challenges our binary tendencies between new and old and suggests that media emerge as a change in ‘existing processes’ that inevitably have social consequences. It is precisely this change in existing processes we find in the amplification of non-linear access from the emergence of the codex to the ubiquity of digital search. McLuhan suggests that the content of every ‘new’ medium is another existing medium (Understanding Media, 8). Just as the codex performed the multiple columns per page of a scroll, so internet search performs and amplifies the print index. I refer to this phenomenon of media building upon and containing its predecessors as material media translation. The language of translation is helpful here because it signals that all media transformations involve a negotiation between new and old with inevitable loss and gain. I use the phrase ‘material media’ to qualify this translation to differentiate this process from the common process of translation of texts into other forms of media such as sound and film. In material media translation, it is the materiality of the interface of the medium that is translated, not simply its ‘content,’ whatever that might entail.

My favorite material metaphor for this process of material media translation is a palimpsest, a manuscript that has been written on, erased, and then written on again. With each new medium writing over an existing medium (or many media) with only partial erasure, material media translation enacts a kind of palimpsest. Below is an image of a page from Codex Ephraemi Rescriptus, a fifth century manuscript of biblical texts in Greek, washed and written over in the 12th century with Greek translations of the fourth century Syriac writings of Ephrem the Syrian (the wikipedia entry on Codex Ephraemi Rescriptus is excellent and provides significant references for a deeper look at the manuscript). This beautiful material enactment of palimpsest, two column miniscule Greek translations of Syriac over single column uncial Greek biblical texts, illustrates marvelously the process of emerging media building upon exisuggest anything to us about the process of translation itself? 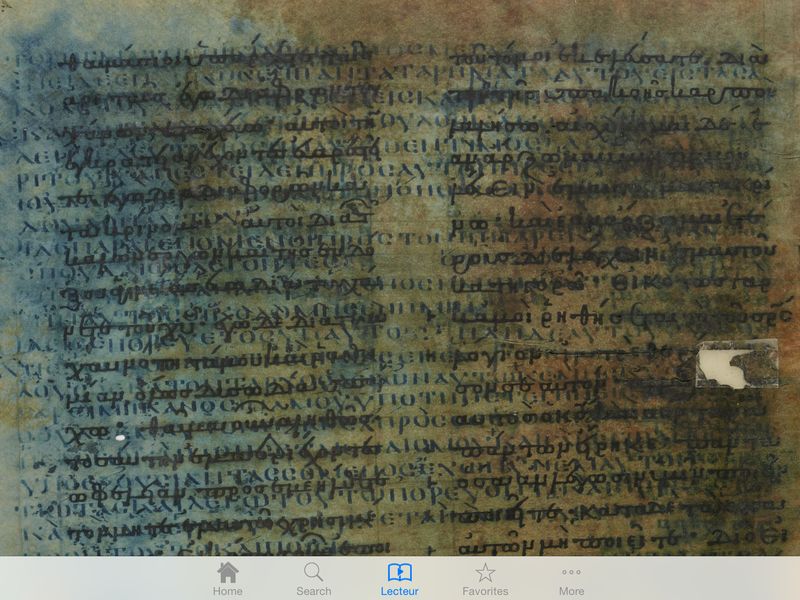 In light of this process of material media translation as palimpsest, remembering bible’s rich media history will provide a helpful context and data for imagining how bible might be practiced as interface amidst the changing reading dispositions of our emerging media age. The material media translation of book from manuscript page to mobile screen already has and will continue to shape our reading practices. Focusing on book as interface, a space for encounter, will highlight the importance of the materiality of these interfaces in producing our reading practices.